Alongside the equivalence decision, the Commission also launched a targeted consultation on ways to expand central clearing activities in the EU, improve the attractiveness of EU CCPs, reduce overreliance on systemically important (Tier 2) third country CCPs, and strengthen EU supervision of CCPs.

This blog explores the measures the Commission is contemplating to enhance the attractiveness and competitiveness of the EU’s CCPs, and considers their implications for UK and EU clearing markets and their participants. It also considers how the UK might respond to the EU’s proposals.

Despite the UK’s withdrawal from the EU, London continues to dominate euro-denominated interest rate derivatives clearing. With the UK becoming a third country at the end of the Brexit transition period, and absent any equivalence decisions, EU access to the UK’s CCPs would have been prohibited. However, noting the financial stability risks of suddenly withdrawing access to UK CCPs, in September 2020 the Commission granted UK CCPs temporary equivalence until June 2022.

Although the Commission has extended equivalence to UK CCPs for now, it has stressed its view that it would be “risky over-reliance” to continue this treatment in the medium term. Consequently, it has also come forward with a consultation, which sets out a range of potential measures to reduce the EU’s “over-reliance” on UK CCPs.

What are the most significant measures the EU is consulting on?

The consultation outlines a range of different measures the Commission is considering taking to enhance the competitiveness of EU CCPs and reduce the EU’s reliance on UK CCPs. In our view, many of the proposed measures are substantial and, if adopted, would either force or heavily incentivise EU‑based firms to relocate euro clearing activity to the EU. Although none of the measures is yet a firm policy proposal, the fact that the Commission has only given the industry four weeks to respond to the consultation suggests to us that it already has a clear view of how it expects to proceed.

Perhaps the most significant of the EU’s potential measures is a proposed amendment to EMIR which would mean that in future EU market participants would only be allowed to clear trades on EU‑based CCPs or Tier 1 (non-systemically important) third country CCPs, effectively preventing them from clearing on third country Tier 2 CCPs. At present, the only Tier 2 CCPs are in the UK. Other third country CCPs which were recognised prior to the introduction of EMIR 2.2 (which introduced the Tier1/2 distinction) will be categorised as Tier 1 or Tier 2 in due course. This means that any measures targeting Tier 2 CCPs currently only affect UK CCPs but could conceivably apply to other third country CCPs in time.

Recent comments by the EU’s Financial Services Commissioner, Mairead McGuinness, that “I am very clear that June 2025 is the end of equivalence for UK clearing houses” [1] strongly suggest the EU intends June 2025 to be a cut-off date for EU firms using UK CCPs, with either a prohibition or failure to renew equivalence likely to end access beyond this point. We expect a more formal announcement to follow (or to be announced as part of the consultation process), with June 2025 acting as a final deadline by which EU firms will be expected to have completed shifting their euro clearing activity to EU CCPs.

We also think the EU is likely to adopt a variety of the consultation’s other measures to begin the shift of clearing activity in the meantime. This is to avoid the prospect of another “cliff edge” in June 2025 and the attendant financial stability risks. One of more substantive measures proposed is to increase the capital requirements for EU‑based firms using, or “over-relying” on, Tier 2 CCPs. The consultation proposes a number of ways higher risk weights could be imposed, including:

Alongside these microprudential measures, the Commission also suggests introducing a macroprudential buffer to reduce EU firms over reliance on Tier 2 CCPs. This would likely create similar incentives to the higher risk weights and would be another way the EU could discourage Tier 2 CCP use.

The EU also posits giving firms specific targets for reducing their exposure to Tier 2 CCPs based on the sum of their initial margins and/or default fund contributions. These could either be targeted at individual firms or employed across the board to encourage system‑wide reduction in Tier 2 CCP usage.

The EU is also interested in measures to facilitate the transfer of derivatives contracts from outside the EU, noting that transactions entered into with UK counterparties before the entry into force of EMIR are exempt from the clearing obligation. Any amendments to these transactions would trigger either the clearing obligation or margin requirements and so pose major disincentives to firms transferring them to the EU. The consultation suggests a permanent waiver could be given to these contracts to allow them to be relocated to the EU without triggering any EMIR requirements.

In our view, the EU is likely to adopt some combination of the above measures in order to start the shift of euro‑denominated clearing activity out of the UK and into the EU. The combination of financial penalties and binding targets for firms to reduce their exposure to Tier 2 CCPs would almost certainly trigger some activity to shift, even if doing so meant the bifurcation of the existing pools of liquidity in the UK’s clearing houses.

There are, however, likely to be limits to the effectiveness of any EU measures. Any EU rules will only affect EU‑based firms, and so any euro‑denominated clearing between other counterparties will not be captured. This will mean a significant proportion of the market remains unaffected. Furthermore, if EU-based firms have clients which are not subject to these new requirements and want to continue to use UK CCPs, these clients could move their business to non‑EU firms.

Alongside the measures discussed above, the EU’s consultation also proposes a variety of other proposals to incentivise more clearing activity to take place in the EU. While important, in our judgement these measures are likely to be less significant than those discussed above. Please see the slides below for a full list of measures being proposed.

The EU’s efforts to reduce its reliance on the UK’s Tier 2 CCPs are unlikely to be welcomed by either HM Treasury or the Bank of England (BoE).

The UK has been looking to address the EU’s concerns about UK CCPs. In its January 2022 Future Regulatory Framework Review for CCPs and CSDs, the UK government proposed clarifying the BoE’s primary objective to maintain financial stability to ensure it:

These clarifications were clearly aimed at heading off the EU’s concerns about its reliance on UK CCPs and the financial stability risks this may pose. However, these efforts seem to have done little to persuade the EU that it does not need to act.

The BoE’s Governor, Andrew Bailey, has previously made clear that any EU attempts to shift the UK’s clearing business to the EU would see a forceful UK response.

The Governor told the UK Parliament’s Treasury Committee that such a move would be “highly controversial and something we would have to resist very firmly”. He said that an “attempt to force and cajole banks and dealers, to say there will be some other penalty for you unless you move this clearing activity…That seems to be where debate is heading… That would be very controversial and, frankly, would be a very serious escalation of the issue.” [2]

However, more recently, the PRA’s Chief Executive, Sam Woods said that the UK would not engage in “a tit-for-tat game” with the EU. [3]

If the UK does respond to the EU, we expect any measures to be in line with the UK’s “open” approach to its capital markets and that the UK would be reluctant to adopt measures which may be seen to mandate activity take place within its markets.

The EU is considering a wide variety of potential policy measures to shift clearing of euro-denominated products by EU-based firms from the UK to the EU. We think the EU is likely to combine some sort of outright prohibition (or the prospect of it) on EU firms using Tier 2 UK CCPs by June 2025, with some combination of capital‑related financial penalties and targets for reducing firms’ reliance on such CCPs to shift activity in the interim. The EU may also look to adopt some of the consultation’s other less substantive measures.

EU CCPs will also face significant operational challenges in building out their capacity and in expanding their range of products and currencies. This has been one of the major reasons why more clearing activity has not shifted so far, and it is unclear if the EU’s proposed reforms will do enough to alter the fundamental challenges firms face in this area.

Given Andrew Bailey’s and Sam Woods’ previous remarks it is unclear whether the UK might respond with its own set of regulatory measures. However, if it does so, any measures will likely be consistent with the UK’s open approach to financial markets.

Firms and their clearing clients could lose out if liquidity is split across EU and UK clearing venues. There are clear benefits, to both firms and wider financial stability, from having most clearing activity take place in one location due to the benefits that accrue from having large pools of liquidity. Splitting these existing pools of liquidity into smaller UK and EU pools may reduce any netting benefits firms receive and make pricing more volatile, particularly in periods of market stress. 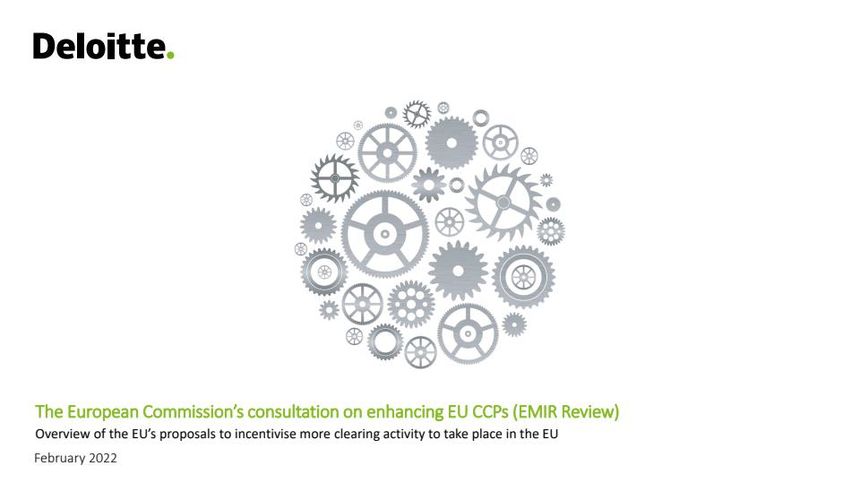