MiFID II 18 months on – what is under the supervisory spotlight?

It has now been almost a year and a half since MiFID II, the cornerstone of European capital markets legislation, became applicable. In this time, where have EU national competent authorities (NCAs) focused their supervisory activity, and what are they planning to look at next? To answer these questions, we surveyed Deloitte subject matter experts across 16 EU Member States on MiFID II supervision undertaken by the NCAs in their jurisdictions^1. This was a follow up to a similar survey we undertook last September. It is important to note that the survey has been completed on a best endeavours basis, and may not be exhaustive of all supervisory activity.

This blog explores these findings in further detail.

Our survey shows that NCAs have undertaken a wide range of activities since MiFID II went live. These include market studies/reviews, firm/sector studies/reviews, on-site inspections, audits, product intervention, and some instances of enforcement. Our evidence indicates that 15 of the 16 countries surveyed conducted at least one of these activities, showing that a significant proportion of NCAs have been actively engaged in some form of MiFID II supervision and/or market analysis over the past 18 months^2. In terms of how much of a priority MiFID II is for supervisors, it differs between NCAs, and many seem to focus on certain elements of MiFID rather than the overall package.

Most survey responses specified their NCAs’ MiFID II focus areas over the past 18 months. Taking the joint top spot was costs and charges, and distribution (including advice, sales, suitability, and appropriateness) and inducements (excluding payment for research), with seven supervisors having looked at this. In second place, looked at by six supervisors, were product governance, and overall MiFID II implementation/compliance. In third place came payment for research, a focus area of four supervisors, although more in terms of market surveys or impact assessments, rather than direct supervisory scrutiny^3.

Overall, our results suggest that over the past 18 months, supervisors have been largely focused on retail investor protection issues, rather than on wholesale markets or market infrastructure topics. The results were broadly consistent with our September 2018 survey, although less supervisory activity has been conducted on transaction reporting than expected, at least that is in the public domain. This may suggest that NCAs allowed firms some time to adjust to the new rules in certain areas, perhaps to address early teething issues with additional data requirements or new systems.

As for the supervisory priorities for the coming year, at least 12 NCAs have announced their programmes – three quarters of the countries surveyed^4. Many of these are expected to be further market studies/reviews, rather than firm or sector reviews or on-site inspections. The supervisory focus areas going forward look broadly similar to those which have been prioritised so far^5. In first place comes distribution and inducements, expected to be a focus area of at least eight supervisors. Costs and charges and product governance take joint second place, with at least five supervisors expected to focus on them. In third place again comes payment for research, with the same four supervisors expected to continue their market surveys and impact assessment work. A number of other areas are likely to attract more supervisory attention than thus far: client disclosures (excluding cost and charges); conflicts of interest; remuneration and staff competence; market and data transparency; and the functioning of the multilateral trading facilities (MTFs); although the number of NCAs that declared their interest in these topics is limited.

Please see the chart below for an overview of the past and future MiFID II supervisory focus areas. 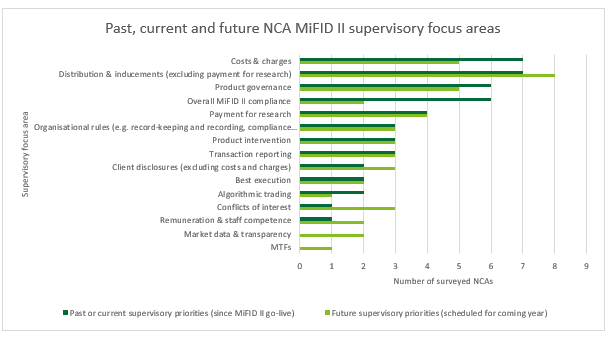 So far, completed enforcement actions seem to have been limited in number – our survey noted only four NCAs have undertaken such measures. Germany has been particularly active, with fines or infringement proceedings around the reliability of investment advisers and sales representatives; securities trading; and conduct, organisational and transparency obligations of investment firms. In Poland, the local regulator conducted actions against the provision of investment services without required permissions (mainly around bond selling). Luxembourg imposed sanctions for violations of firm governance requirements. Finally, Portugal has seen an increase in infractions (investigations that may lead to a fine) in financial intermediation in the first quarter this year, where MiFID II is the most relevant regulation. The UK FCA also fined two banks for transaction reporting failings. However, these were levied for transactions under MiFID I.

A number of other trends and initiatives across the EU are worth highlighting. Related to MiFID II, the survey results show emerging supervisory interest in robo-advice, fintech and sustainability - all of which are expected to be focus areas of the new European Commission. For example, the German BaFin has recently been paying particular attention to sustainable finance, and started putting out statements to alert firms to the future MiFID II environmental, social and governance (ESG) factors requirements. Responses from Austria and Sweden noted supervisory interest in innovation and the utilisation of new technologies within investment firms, and in particular robo-advice tools.

The 2019 Activity Plan of the Spanish regulator features mystery shopping reviews, focusing particularly on the marketing of financial products.

Finally, while MiFID II does not apply to Switzerland directly, some Swiss banks have been implementing it nevertheless, as they service EEA-based clients, and/or have EEA branches or subsidiaries. There will be a Swiss equivalent of MiFID II coming into force in early 2020 (FIDLEG/FinSA), although it is expected to be less prescriptive than its EU counterpart. In consequence, firms will likely refer to the equivalent parts in MiFID II where the detail is absent.

It is not just NCAs that are undertaking MiFID II supervisory activity. Interestingly, the European Securities and Markets Authority (ESMA) has just announced a “common supervisory action” on MiFID II supervision, to be simultaneously carried out by participating NCAs in the second half of this year. Participating NCAs will assess a sample of investment firms under their supervision on the application of the appropriateness requirements. Similar initiatives on other MiFID II topics could follow, especially since the European Supervisory Authorities’ Review (agreed earlier this year), and the coordination groups it establishes, could make supervisory convergence actions like this more common.

What does this mean for firms?

The evidence shows that MiFID II, as expected, has been an important topic for EU NCAs and they have deployed a wide range of supervisory tools. We expect this to continue and potentially to include a progressively broader range of themes. Although completed enforcement actions have so far been limited, this may change in future as more supervisory activities take place. Firms therefore should ensure they are compliant with the rules, which have now been in force for 18 months, and conduct internal reviews and compliance audits – well before supervisors come knocking.